The Bunburys: Remember this Bee Gees and Eric Clapton supergroup?

It was definitely one of the more unlikely musical pairings we’ve heard of.

And that’s perhaps why The Bunburys, a supergroup made up of the Bee Gees and Eric Clapton, sounds like the stuff of legend rather than reality.

On one hand, you had the Gibb brothers who transformed popular music with their unique harmonies, heart-wrenching songwriting, and iconic high-pitched vocal that brought disco to the mainstream with Saturday Night Fever.

On the other hand, there’s Eric Clapton, the guitar virtuoso who is widely considered to be one of the greatest musicians of all time.

Barry Gibb credits Eric Clapton for changing the Bee Gees’ fortunes during the 1970s
10 incredible cover versions of Bee Gees songs
Watch a gobsmacked Bee Gees giggle their way through This Is Your Life episode
Watch Eric Clapton perform a heartbreaking tribute to late son ‘Tears In Heaven’ for the first time
But how did these worlds collide, and how did they end up working together as The Bunburys?

Well, it’s not quite as inexplicable as you’d think. In fact, Eric Clapton has been good friends with Barry, Maurice, and Robin Gibb since the late 1960s.

hroughout their careers, until that point they’d also shared record labels, managers, and even backing singers.

Barry Gibb even credited his pal Clapton of helping the Bee Gees get out of their sticky patch during the 1970s when they hadn’t written a hit single in several years.

The Gibb brothers had been toying with the idea of forming a supergroup for some time – they wanted brother Andy Gibb to join the band but it didn’t work out, and he tragically passed away in 1988.

Even Peter Frampton was considered after they worked together on the 1978 mega-flop Sgt. Pepper’s Lonely Hearts Club Band, from which he suffered major career setbacks even after the astronomical success of Frampton Comes Alive.

After the disco explosion, the Bee Gees themselves were in the midst of a career downturn as the trend waned, taking the Gibb’s popularity with it.

They had to settle for taking a behind-the-scenes role in music, writing songs for legends like Barbra Streisand, Dolly Parton, and Diana Ross.

Once again during the 1980s, they’d turn to Clapton to change their fortunes when they were shunned from the limelight.

The Bunburys was a project created by David English, a former Bee Gees manager who helped the boys achieved their global success with RSO Records.

English took the name for the project from his cricket team, and the first batch of songs were written to coincide with his children’s cartoon book We’re The Bunburys.

The musical project was led by the Gibb brothers, who recorded three songs for a charity album with the proceeds going to The Bunbury Cricket Club, which plays exhibition cricket matches to raise money for nonprofit organisations in England.

The premise of the book English wrote was about sportsmanship and good will, and Eric Clapton was a good sport for getting involved for ‘Fight (No Matter How Long)’, providing lead vocals and guitar.

A fist-pumping collaboration between the two artists from very different arenas, the track was warmly received by both sets of fans. 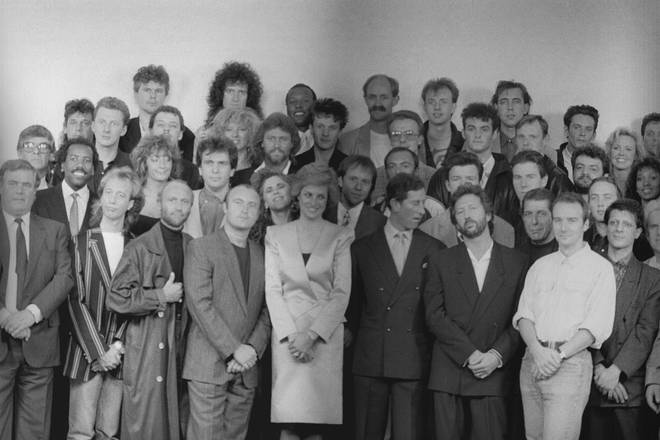 Even though it was a relatively obscure release issued only in the UK at the time, ‘Fight (No Matter How Long)’ caused a stir despite neither Clapton or the Bee Gees being credited.

Given the triumphant feeling of the song, it was picked up and used for the 1988 Summer Olympics Album in conjunction with the Olympic Games held in Seoul, South Korea that year.

Because of its inclusion, ‘Fight (No Matter How Long)’ reached No.8 on the rock music chart, the first and only appearance on that chart by the Bee Gees.

The only time Eric Clapton ever appeared on stage with the Gibb brothers was at Prince’s Trust rock gala in London in 1988.

They’d never appear on stage as The Bunburys, leaving the project as a one-off that was consigned to the history books.

Based on this song, they perhaps should’ve been given more credit, proving that the Bee Gees could rock out from time to time too.

‘It’s not right to go’: Rod Stewart turned down more than $1m to play in Qatar

The Truth Behind The Thom Yorke – Muse Feud

Read More
MMusic
TOM CRUISE lashed out at his staff members in a rage-filled tirade over COVID-19 protocol violations, and George…

Read More
MMusic
Cobra Kai season 5 proves that the show has forgotten who its main character is. Arguably the Cobra…

Read More
MMusic
Trace Adkins could persuade you that country music stardom is a hazardous occupation. The singer has survived numerous…

Read More
MMusic
During their ongoing (and extremely loud) concert tour of Europe and North America this summer, Rammstein are reaching…