Hawkins, who played drums for the band from 1997, was found dead in his hotel room in Bogotá, Colombia in March 2022. He was 50 years old.Foo Fighters will serve as one of the three headliners at this year’s Boston Calling festival, topping the bill on the opening day of the weekender on May 26. The Dave Grohl-led band was scheduled to perform at the festival in 2020, but that edition was cancelled due to the pandemic. This year, fellow headliners The Lumineers (27) and Paramore (28) will join them at the top of the line-up.

The festival will also see the return of Queens Of The Stone Age, while the likes of Alanis Morissette, Bleachers, Yeah Yeah Yeahs, The National, The Flaming Lips, Niall Horan, Maren Morris, The Linda Lindas and more will also perform. Tickets for Boston Calling 2023 will go on sale at 10am ET on Thursday (January 12). Purchase tickets here and find more information on the festival’s official website. 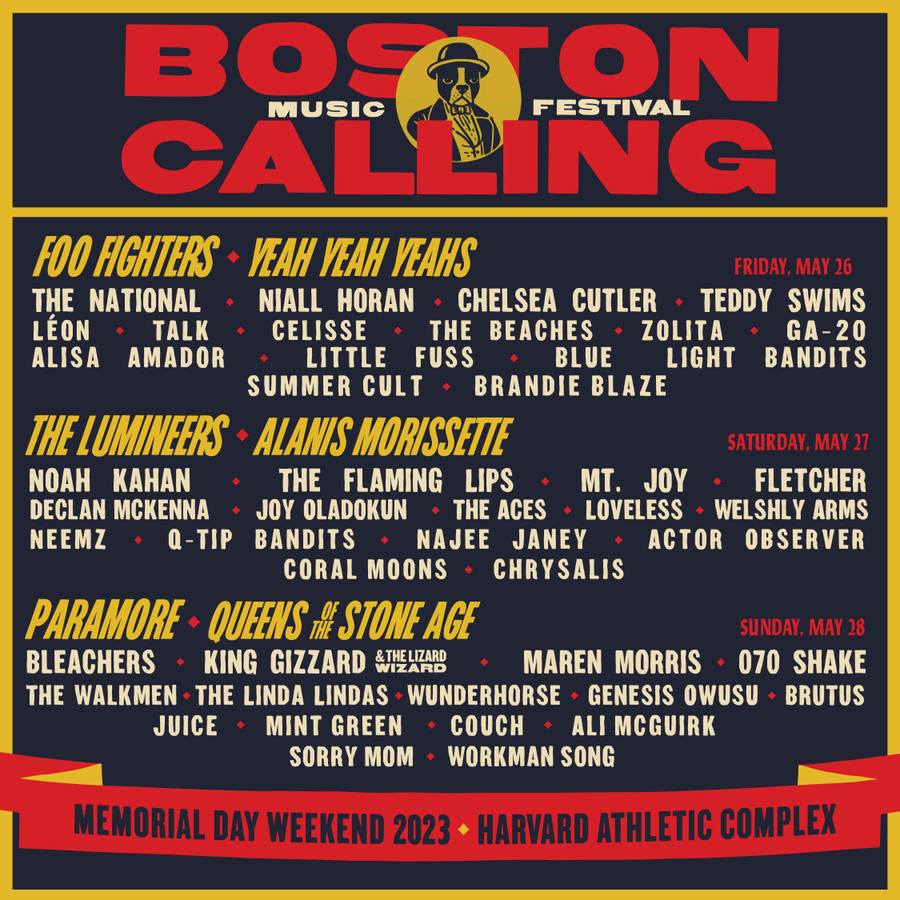 Since confirming Boston Calling 2023, Foo Fighters have also been unveiled as a headliner for both Columbus, OH’s Sonic Temple festival on May 28 and Bonnaroo on June 18.

At the end of last year, Foo Fighters shared a message with fans, confirming they would continue to perform together following Hawkins’ death. Since he died, the band have only played live at two special tribute concerts in London and LA last September.

“Foo Fighters were formed 27 years ago to represent the healing power of music and a continuation of life,” the band wrote in the statement. “And for the past 27 years our fans have built a worldwide community, a devoted support system that has helped us all get through the darkest of times together. A place to share our joy and our pain, our hopes and fears, and to join in a chorus of life together through music.

Both tribute concerts for Hawkins were star-studded affairs, with some of the greats of modern rock coming together to honour the late musician. In London, Foo Fighters took over Wembley Stadium for “a gigantic fucking night for a gigantic fucking person”, as Grohl dubbed it. The show featured Them Crooked Vultures’ first live performance in 12 years, Metallica’s Lars Ulrich and AC/DC’s Brian Johnson teaming up on a pair of AC/DC covers, and The Eagles’ Joe Walsh leading a reunited James Gang for their first gig in 16 years.

Grohl also joined the surviving members of Rush on stage to perform a handful of the band’s biggest hits, while he also performed with his daughter Violet Grohl as she covered Jeff Buckley alongside members of Queens Of The Stone Age and Jane’s Addiction. Violet appeared once again later to cover Amy Winehouse’s ‘Valerie’ with Mark Ronson.

Read more: Inside the Taylor Hawkins Tribute Concert: “A gigantic fucking night for a gigantic fucking person”
Foo Fighters closed out the Wembley concert with a “revolving door of drummers” in Hawkins’ place, helping them perform some of their own biggest songs. Among the guest drummers were Travis Barker, Nandi Bushell and Hawkins’ son Oliver Shane Hawkins.

In LA weeks later, the Foos were joined by the likes of Miley Cyrus and Def Leppard for an expansive version of Def Leppard’s 1983 hit ‘Photograph’, Pink and Queen joining forces, Dave Chapelle covering Radiohead, and Joan Jett performing with the band and Travis Barker.

Surviving members of Soundgarden and Nirvana also teamed up at the LA gig, which was held at the Kia Forum, to perform some Soundgarden classics. Grohl, Krist Novoselic, Pat Smear, Kim Thayil and Matt Cameron came together to perform two tracks, fronted by The Pretty Reckless’ Taylor Momsen.

Read More
MMusic
During his conversation with Rick Rubin’s Broken Record, the Doors drummer John Densmore recalled their times as bandmates…
MMusic
You’re a rock star. What’s with getting your own zucchini at the Summerlin farmer’s market? I love going…